This afternoon I’ve been playing with and testing Flavors.me, which was pointed out to me by designer Simon Ianson.

The service is currently in private beta but once launched aims to help you create “an elegant website using personal content from around the internet”, ie. help you bring a selection of your social media presences under one roof and for it to look nice. The latter I think is the point as much as the former. The company are citing possible uses as:

From what I understand the service is being built by Jack Zerby, designer director at Vimeo and his partner in crime Jonathan Marcus, but I should emphasise that the project is not affiliated with Vimeo.

Pages on the site aren’t yet public and unfortunately the demo video (also see it here) isn’t shareable, not sure if that’s purposeful, but I can share this video made by someone else who has tested things out:

And here’s a pic of my test, which took me about 30 minutes to put together – but only because I decided to play with the font colours and background design, and was enjoying things a bit too much. In reality you could get something functional up in about 2 minutes and something more to your tastes up in about 5-10 minutes. 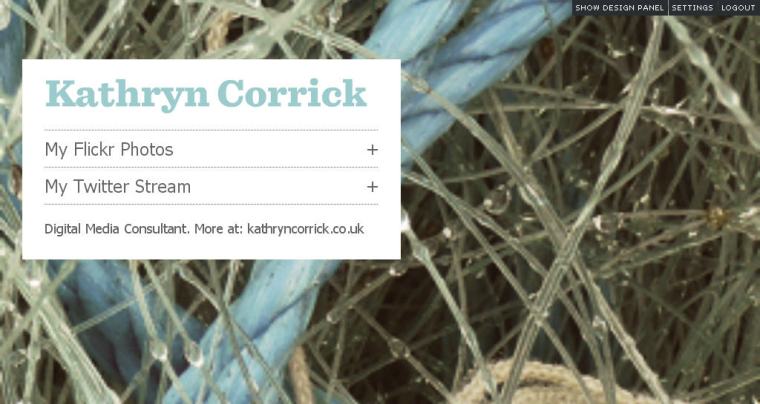 During my experimentation I came across a few minor bugs and the team were impressively quick to respond. From Simon’s experience as well, they seem very keen to get the service right, which is fantastic.

What I like is that it’s simple, brings things together, and does what-it-says-on-the-tin as the results generally look good (although some of the pre-selected colour schemes don’t work for all content). I can see how it could be popular as a personal webpage or the starting point for a celebrity fan site, gathering all the pieces of social media presence together.

However, at the moment there are only six social media services that can be added to your Flavor.me site – Twitter, Flickr, Vimeo, Tumblr, Facebook and Last.fm. Whilst these do cover a wide variety of possible intents and users, it will be interesting to see how the team balance the design of Flavor.me with the desire of users to have more services included.

Simon also pointed out, and I agree, that being able to add your own domain to the service would add great value to the proposition (although, noted, this does add technical complexity). So instead of the URL http://flavor.me/user/kcorrick it could resolve to kathryncorrick.co.uk (or whatever).

I’m not also not sure that as the service currently stands would be something that could withstand the rigours of brand management and marketing: the fonts – whilst funky – are still fairly limited, and only one image can be uploaded, which for a brand would introduce interesting questions regarding logos (it still always comes down to logos, unfortunately).

But I’m sure there is much to come, given that the service I tried is in beta and de-bug mode put together with the obvious keenness by the team to get things right.

UPDATE 19/10/2009: Jack from Flavors.me has been in touch and responded to some of my queries above. Watch this space.