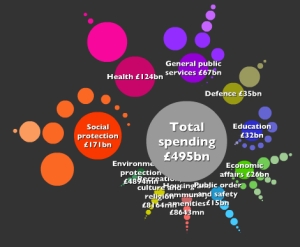 As some of you may know I’ve been working with the Where Does My Money Go? team over the last month or so, helping with the communications side of things.

Where Does My Money Go? (WDMMG) is run by the Open Knowledge Foundation, a “not-for-profit organization promoting open knowledge: that’s any kind of information – sonnets to statistics, genes to geodata – that can be freely used, reused, and redistributed.”

WDMMG gathers, analyses and visualises UK government spending data with the aim of making that information more usable and useful – for tax payers, journalists, businesses, researchers, policy makers, politicians and more. The aim is to make government spending as transparent as possible to hold the government to account but also to enable more informed decision making in the long run.

It’s a fascinating project and is part of a wider open data trend and movement that has been gathering pace over the last few years.

One of the main protagonists in this area is father of the web Tim Berners-Lee, who is famed for getting the 2009 TED conference audience to shout “Raw Data Now!”.

So as a way of introducing the concept of open data and it’s potential power, this five minute video by Tim at this year’s TED conference is worth viewing:

UPDATE 5/08/2010: Apparently TBL’s shout of “Raw Data Now!” was based on a meme that started with this Open Knowledge Foundation blog post, and which Tim cites here.